Superballs.io is not available anymore. Let's try a similar game! 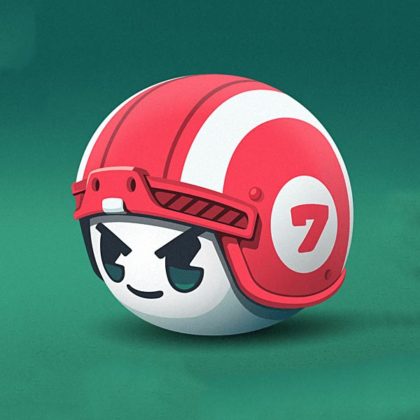 If you’ve ever thought about taking eight ball pool to the absolute next level, Superballs.io is the perfect game for you. The game works like a pool where you have to pot balls into one of the sockets. However, unlike pool or snooker, there are multiple sockets available throughout the map. Apart from that, other players are competing to win the game as well.

Be careful not to put your ball into one of the sockets as that will result in your game ending. Other players can knock you in as well, so you have to be careful about your positioning. To win the game survive as long as possible and get the most points.

Points are earnable through two primary methods. One is through potting the non-player balls in the game. The non-player balls are hollow and do not move, once you hit these balls they will take the color of the ball you’re controlling. Furthermore, you’ll get more points by potting in player balls. These are similar to your player ball. The player balls are much harder to pot as these are under the control of competing players.

Furthermore, as you play through the game and gain more points, you can level up. It is increasing the impact of your ball and the size as well making it easier to pot other balls. Another upgradable factor is the speed at which your ball travels. The game allows you to tailor the upgrades to your need.

You can control the game entirely using your mouse. If you’re playing on a laptop be sure to use an external mouse. The external mouse will help with a lot of the games functions. The mouse controls the direction in which move your ball. Holding down the left mouse charges down the power, controlling the power is a key aspect of the game. To get a quick shot away at full power use the right mouse button, this can be incredibly effective when trying to knock in other players. The mouse scroll controls the level of zoom on the map.

Once you start playing the game and get a few kills, you’ll gain experience. The XP can be used to level up and get upgrades. The upgrades corner is in the bottom right corner of the screen. The three upgradable categories are power, impact, and size. As you increase power, it increases the speed of your shot and impact increases the distance balls that you hit move. The most beneficial upgradable category is size. Upgrading size significantly decreases your possibility of losing the game.

There are two major gamed modes that you can pick. The first is Rush. Rush involves five quick-fire rounds, where you can score points and eliminate other players. All the upgrades that you earn are transferrable to each series you play in. The second mode is endless, which as the name suggests one infinite round where you can re-spawn and play over and over. Score and upgrades reset every time you die in endless mode.

Get ready to play this new age version of pool.