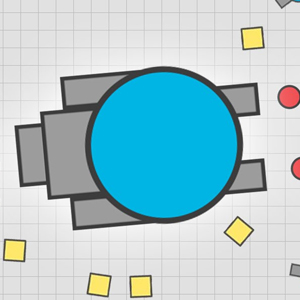 Diep.io is a snazzy free online game that features tanks, exploration and exciting quests. The gameplay is action packed and thrilling involving tank based combat to take down other tanks during challenging missions and interesting tasks to accomplish. The game includes 8 different modes you can select from including FFA, Trivia, Survival and Team DM amongst others. It is fun playing this superb game in the multiplayer mode which makes the entire gaming experience even more thrilling.

Diep.io is an action packed game including tanks, bullets and challenging gameplay rules. Your tank is marked blue as are your bullets while the rest of the opponents have red tanks & bullets and these are the ones that you need to take on in order to move up higher levels and grab exciting power ups. You will, however, need to follow the basic game rules like no respawning if caught and staying as long as possible in the game because the last tank standing will be the victor. Be careful not to bang into the red tanks and stay vigilant, so you can dodge the fiery bullets while you work your way up.

How To Play Diep.io?

In order to play Diep.io, use the mouse to control the tank’s movements inside the arcade and click for shooting at an opponent’s tank.