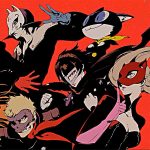 The first game of the series got released 1996 for the PlayStation, after that a total of five more games were lunched, the most recent one being Persona 5 in 2016. Persona is a role-playing game series, or as the fans like to call it a JRPG.

The series is fully turn based and you have no time limits. The combat system is very innovative, wherein attacking an enemy’s weakness and causing critical hits allows for an additional turn. Think of it as a halfway between Pokémon and Final Fantasy.

This article will focus on persona 5 and the characters present in it. Persona 5 was released in Japan on September 2016, while the worldwide release was on April 2017. The game also had 2 different publishers, as Atlus published it in Japan and North America and Deep Silver published it in Europe and Australia. An expanded version call Persona 5 Royal is also in making featuring new content, it is said that the Japanese release will be in October 2019 and the worldwide release will be in 2020.

Persona 5 takes place in modern-day Tokyo and follows the protagonist Joker. Joker is transferred to Shujn Academy as he’s on probation for an assault of which he was falsely accused. As you progress in the story you get to know that Joker and other students have special powers, what do they do with these powers you ask? They from a group of secret vigilantes known as the phantom Thieves of Hearts. Their goal, to explore the Metaverse and steal malevolent intent from the hearts of adults.

Persona 5 was met with critical acclaim, with praise given to its visual presentation and art direction, cast, gameplay, and music. The game is considered to be one of the greatest role-playing game of all time. The characters present in the game really do help this statement, full of diverse and unique personalities that you’ll discover throughout the game. Here are some:

Morgana is a playable character from persona 5. He is a member and the second-in-command of the phantom thieves of hearts. Morgana keeps on insisting that he was a human once, spending most of the game trying to find his true identity. Alongside Ryuji and Ann, Morgana joins the protagonist as you start persona 5. Making Morgana one of the first playable characters introduced in the game. 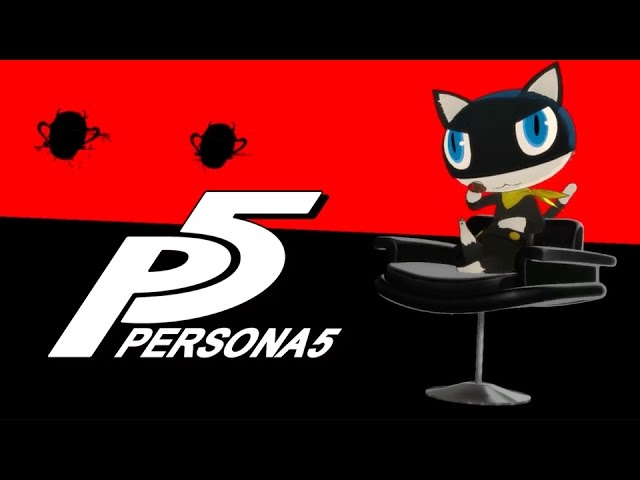 The design of Morgana is very unique, as he has the ability to shapeshift. Predominantly Morgana appears as a normal black cat with blue eyes, his muzzle, paws and tail tip are white. Morgana also wears a yellow collar. Morgana can also shapeshift into an anthropomorphic and biped from. His head and eyes get bigger, the yellow collar turns into a yellow bandana and he gains a utility belt as well. Morganas’ last transformation in this game takes the shape of a van, based on the Citroen H van which can be used to travel the metaverse.

Morgana uses the codename Mona, when fighting for the phantom thieves of hearts. The shapeshifting cat Morgana uses curved Swords as his Melee Weapon, and Slingshots as his ranged weapon. Morgana also has a persona named Zorro, a masked swordsman of justice. Zorro specializes in Wind skills and recovery, at level 75 he gains access to Salvation which is the strongest healing skill in game. It fully heals the party and removes all status conditions.

Morgana can at times be rue and arrogant, however he served to be the most vital member of the phantom Thieves. Without him there wouldn’t be any phantom thieves, he is way more than just a right-hand man, he is the players’ sensei, their roommate and probably the one who has the players back the most.

Yusuke Kitagawa is a playable character in persona 5. Yusuke is a student in the fine-arts department of Kosei High School who becomes involved with the Phantom Thieves of Hearts. He was a victim of Madarame, who for Yusuke was like a father figure. Madarame used and abused Yusuke, often taking credit of Yusukes’   painting. 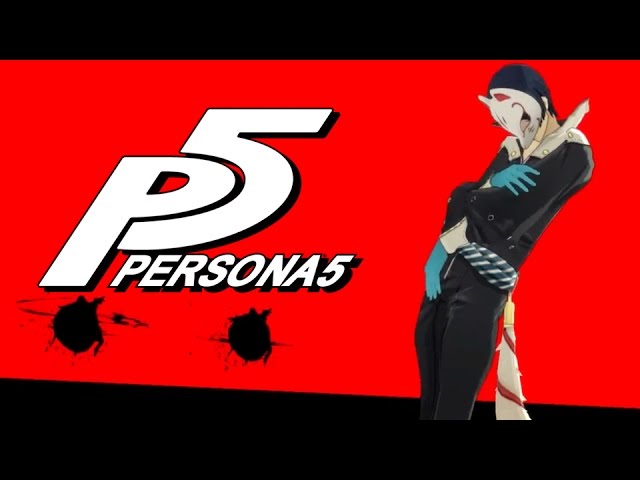 Yusuke has a very composed and elegant design. He has dark blue hair with parted bangs covering his left eye and the color of his eyes is gray. He is taller and thinner than other male characters, some fellow Phantom Thieves describe him as a “pretty boy”. His phantom thief outfit consists of a Kitsune (fox) style half mask, exposing his lower face and eyes. Yusuke wears a black high-collared jumpsuit, with puffy sleeves along with white motorcycle boots and bright blue gloves. To top it off, a white fox tail is attached to the jumpsuit.

Using the phantom thief codename “Fox”, Yusuke uses a katana for his melee weapon and assault rifles. When Madarame was revealed to be a corrupt, vain and greedy man Yusuke awakens his persona known as Geomon. Geomon learns a few ice magic skills, however his move set is heavily physical-oriented.

Ryuji Sakamoto is another playable character from persona 5. He is a student at Shujin Academy and a member of the Phantom thieves. Think of Ryuji like the worst best friend that anybody can ever have. He is the first friend, you the protagonist makes. Alongside Morgana and Ann, Ryuji joins the protagonist as you start persona 5. Making Ryuji one of the first playable characters introduced in the game. 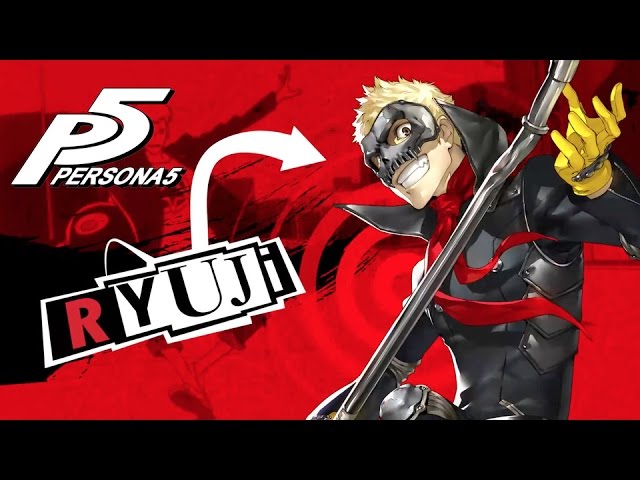 Ryuji comes from a household with an abusive father, who eventually abandoned Ryuji and his mother. Later on, Ryuji becomes a star athlete on the school’s track team easing his mother’s burden too. This however leads to abuse by the schools coach Suguru Kamoshida. The coach began telling everyone at the academy about Ryuji’s parents, Ryuji triggered by this tries to attack Kamoshida but in manner of “self-defense” Kamoshida brakes Ryuji’s leg.

The design of Ryuji sends this bash and loud mouth vide, and it totally works with the character. Ryuji has short spiky dyed blond hair and dark brown eyes, his hair is said to be naturally black. He has unusual eyebrows, as he lacks the outer sides. Ryuji is also shown to be a muscular. Ryuji travels the metaverse in his burglar outfit, which consists of a black jacket with matching pants that have knee pads. He wears combat boots, a pair of yellow gloves and a skull mask.

While being one of the phantoms Thieves, Ryuji goes with the codename Skull. Ryuji uses Bludgeons for his melee weapon, and for his ranged weapons this guy goes shotgun crazy. One of the coolest persona in game belongs to Ryuji, named Captain Kidd. Named after the infamous real life pirate William Kidd, this persona has a very good backstory. Captain Kidd specializes in Physical and Electricity attacks.

Shinya Oda is a character from persona 5. The Ultimate shooter master, Shinya is an elementary school boy who plays at the Gigolo arcade at Akihabara. He is called the “The king” due to his gaming genius. He teaches the protagonist shooting techniques that come in handy on this adventure.

Shinya has dark hair and dark eyes. Wearing a red cap that reads “GET SMOKED” in yellow. He wears a blue varsity jacket with “NOOBS” written on the front in black, the sleeves of the jacket are white. His blue jeans are rolled up halfway and he has blue sneakers.

Shinya plays this video-game called Gun about, he also teaches the protagonist using this game. His personality is so bratty and arrogant, however the more time you spend with Shinya you see just how much of a gem he is. The more he softens and grows to be like a little brother you never had.

Ann Takamaki is a playable character from Persona 5. Ann studies at Shujin Academy and is one of the members of Phantom Thieves. Alongside Ryuji and Morgana, Ann joins the protagonist as you start persona 5. Making Ann one of the first playable characters introduced in the game. Ann Takamaki is one quarter American who recently joined the protagonists’ class, her English is fluent and is a model. Despite all her popularity, the girls in Ann classroom avoid her due to the rumored relationship with the gym teacher Kamoshida. 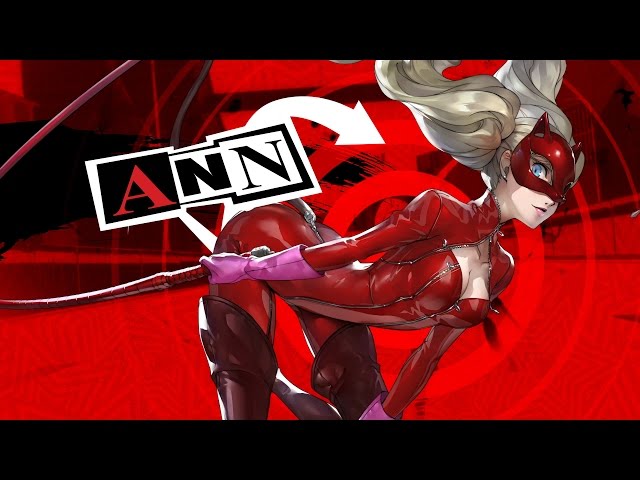 The design of Ann is beautiful, she has bright blue eyes and wavy platinum blonde hair tied up in bushy pigtails. She is of mixed ethnicity and the design for her works well with it. While working with the phantom thieves of hearts, Ann goes by the codename Panther and has a different outfit. Her phantom thief outfit consists of a Skin-tight red latex cat suit, matching red panther mask along with pink gloves, red thigh-high boots and a clipped on tail. Ann uses Whips as her melee weapon and submachine guns as her ranged weapon. She also uses her persona which she awakens.

Ann joins the Phantom Thieves to get revenge on Kamoshida the gym teacher, as her only friend Shiho Suzui attempted suicide because the gym teacher sexually abused her.  As part of the Phantom Thieves Ann defeats Kamoshida, by awakening Carmen the initial persona of Ann. Carmen’s roster primarily consists of fire skills with some healing and support. Maxing Anns’ confidant makes her persona Carmen evolve into Hecate, which unlocks the fusion of Ishtar.

Persona 5 is a vast game containing multiple different characters, these are just a few fan favorites there are even more interesting characters waiting inside the game.