Minecraft upon its official release in 2011, wreaked havoc in the gaming industry. The game was and still is immensely popular with a level of sandbox creativity that is still unmatched. It’s no surprise that in 2018 it is the 2nd highest selling game in history. Not many games can boast fans that can identify individual pixels. The game is playable on a host of platforms, but the core of the game remains the same. The graphics may not be for everyone, but the 8-bit style is nostalgic and creates a unique experience. Fans of the game are crazy for it, and in spite of it being nearly eight years old, the game still gets newer players each year. It is incredibly popular with the younger generations as well, due to the family-friendly nature of the game.

Where the game is slightly obtuse is the complete disregard for any sort of guide for the player. The game has an incredibly complex crafting system but no in-game explanation to it, this makes players continuously reach out for guides. Like most other guides, this one has a specific aim in mind as well.

How to create a saddle in Minecraft?

The question only arises once you have found yourself a steed, the steed will help you traverse the worlds with ease but you need a saddle to ride it. The guide will move towards guiding you on how to make a saddle in Minecraft, all different versions of the game.

How to get a Saddle in Survival mode? 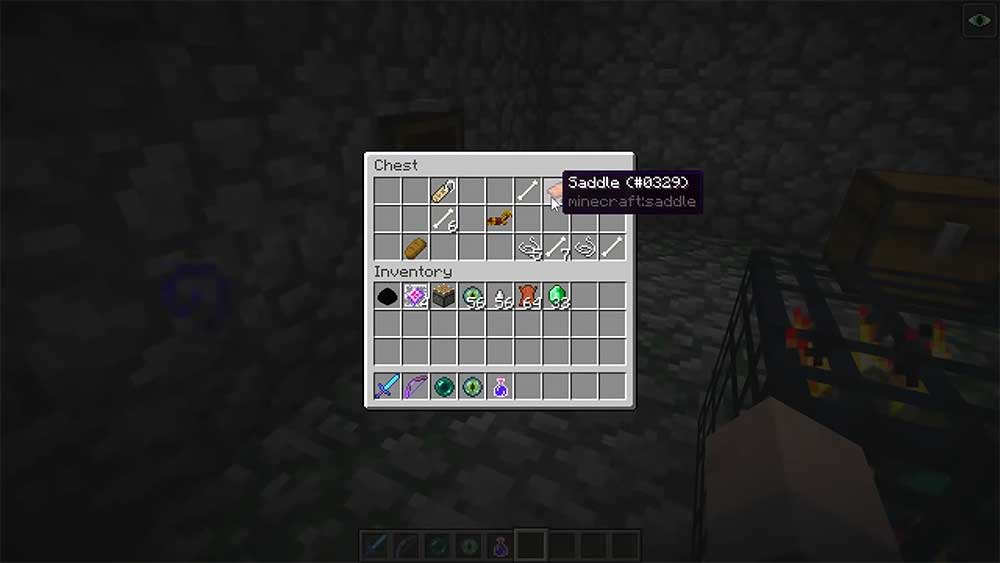 Starting with the dungeons, the dungeons if you haven’t been to already, are randomly generated on each map. Dungeons in the game are easily recognizable; players should look out for the cobbled stone environments. The various types of monsters chasing you can also be a critical indicator that you are in a dungeon. Therefore it is recommended to enter one with weapons and armor equipped as you won’t know what you’re coming up against. Dungeons are generated randomly in every single game, so there are no set locations, you’ll have to count on good old fashioned exploring. If you can’t find the dungeons, an easy tip that can help you locate them without having to travel too much is switching into spectator mode. In spectator mode, you can view the randomly generated world from a freehand point of view. Using the free camera locate the dungeon on the map without having to put yourself in danger. Once you enter the dungeon, it is essential to check every treasure chest you can until you find the saddle.

Nether fortresses are another way of getting the saddle. To enter the Nether, all you have to do is create a nether portal. A nether portal can be made using obsidian, flint, and steel. You will require 15 pieces of obsidian to build the structure. The structure should be 4 obsidian across and 5 obsidian in height. If you’ve never been to the nether, the easiest way to describe is hell on Minecraft. The nether is the world where Minecraft monsters live, more often than not these monsters carry loot, but be careful as the monsters are very high level here. Once inside the nether you must find a fortress, these fortresses will usually contain chests in them. Search through all the chests until you find one. The Nether fortress chests have the highest probability of generating a saddle in the entire game and visiting this location will make sure that you get your saddle. 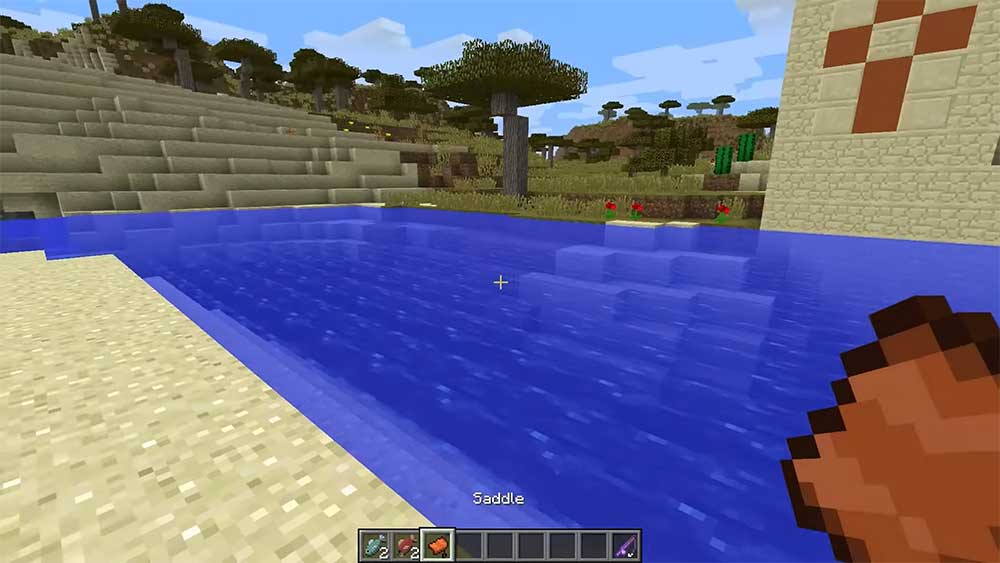 Alternatively and somewhat hilariously, another way to get the saddle is through fishing. Fishing under the classification of a “treasure item” can also help find a saddle, though the chances of this happening are incredibly slim. This method can end up in a lot of wasted time unless you have several fishing rod enchantments that can help increase the probability of you finding treasure items. The “Luck of the sea” enchantment can double your chances of finding a saddle through fishing. In spite of the enchantment the probability to find one through fishing is still very low, but it’s worth a shot if you see no other option.

If you don’t want to waste your time fishing and you don’t feel comfortable braving the other two mentioned places, worry not. There is another much easier way to get the saddle, although it will cost you. Yes, the saddle can be acquired through trading as well. Villagers that belong to the leatherworker village will trade the player the saddle in exchange for 8-11 emeralds usually. However, some of the game’s quirks make it a little more complicated. 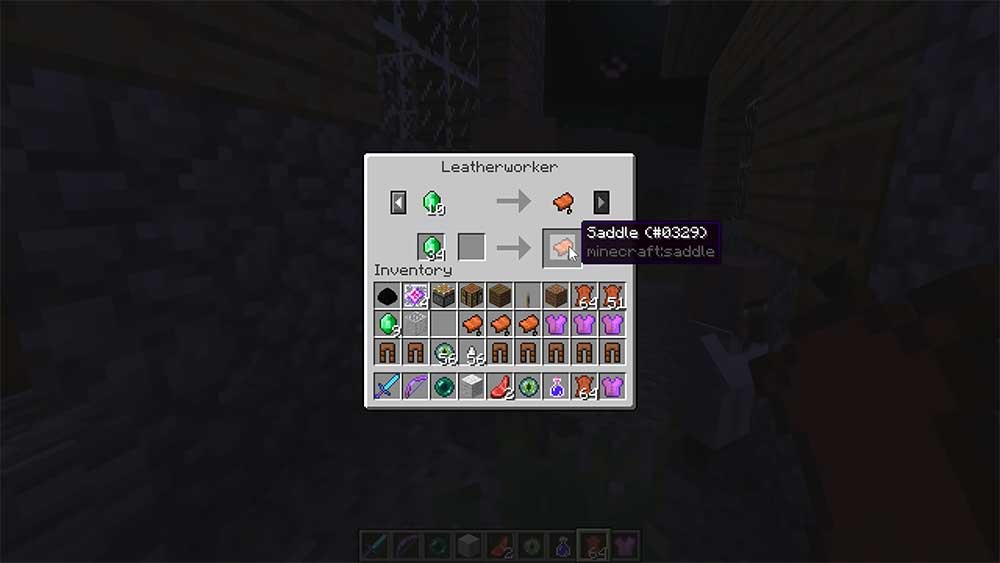 Before you can even trade for the saddle directly, you’ll have to pay 15 emeralds for the ability to be able to purchase them in the first place. There are some things about the game that are somewhat infuriating, but yet it does nothing more but add to its charm.

For those of you playing the latest updates, another method of getting a saddle is taking on a Lllager beast. The Lllager beast is a new horde addition to the game. It is one of the larger monsters of the game. The beast can be a real challenge if you don’t know what you’re doing, they have some very powerful attacks. While its attacks can leave you gasping for health, the beast has a 50% chance of being stunned on blocking. The creature is guaranteed to drop a saddle upon death.

These are all the ways you can get a saddle in survival mode, unfortunately, and a rather glaring omission from the crafting system of survival mode are saddles. One of the above methods should get you the saddle, but if for some reason you can’t, or you just aren’t bothered, there is another way. It is considered cheating in some regards, but you can use the command console. Opening the command console is relatively simple in Minecraft, just press /key and input your command. The command for a saddle is as follows; /give @p saddle 1 0. These commands are usable in all editions of the game, except the PlayStation 4 port.

How to make a saddle in Minecraft creative mode?

Making a saddle is much easier if you’re playing the other mode in the game, creative mode essentially gives you all the crafting tools in the game in your inventory. The mode is incredible for building grand vistas and architectural marvels but other than that; it isn’t gratifying. Getting a saddle in creative mode is just navigating the. However, due to slight cosmetic changes in different editions of the game each version has its unique menu titles. This guide will further explain how to access the right menus on different additions of the game.

Minecraft java edition is the PC/MAC version of the game and was the first edition to be released. To craft the saddle in the game, open the creative menu and go into the transportation section. Select the saddle from there, and it’ll be in your inventory.

There may still be people in the world that own an Xbox 360 solely so they can play Minecraft. If playing on the Xbox 360 version of the game, the saddle can be accessed from the Redstone and Transportation category. The same category is used for the older variant of the Xbox one edition of the game. The updated release of the game places the saddle in the equipment category.

In the latest edition of the Minecraft update for the Nintendo switch, the saddle can be found in the equipment menu. Wii U owners can find the saddle in the Redstone and Transportation section.

Now that all the ways of getting a saddle are established let’s move on to how you can actually make use of the saddle.

How to put a saddle on a horse?

Horses are amongst some animals that are tamable in Minecraft. To tame a horse the first step is to ensure that you have nothing selected in your hotbar. The second step is to mount the horse, after being mounted the first time the horse will throw you off. Now it becomes a game of doing it repeatedly until little hearts start appearing near the horse. Once the hearts appear the horse will not throw you off anymore. However, any form of movement is still not possible as the game won’t allow you to mount the horse until you’ve equipped the saddle.

To equip the saddle press the inventory button on your respective console once you’ve mounted the horse. After you’ve opened the menu, it is a simple matter of simply selecting the saddle and equipping it.

There are a host of other animals that you can use the saddle on, these include; Skeleton horse, Mule, Donkey, and a Pig. Using the saddle on the pig also lets you unlock the “When Pigs Fly” achievement on the game. All you need to do is to ride a pig off a high cliff essentially; this achievement is unlockable on all console editions of the game.

Minecraft is still actively played, and watched on all platforms, the popularity of the game is immense, and it is incredibly popular with the younger generation. While seasoned veterans of the game may already know most of the things published in this guide, it is important to keep posting guides of the sort to help newer players. Due to Minecraft’s minimal guidance on some of the game’s most essential mechanics, players that are new to the game will often struggle to figure out what to do. This is where guides like this will come in and hopefully help another generation of Minecraft players become seasoned veterans.