Before the release of PUBG, the battle royale genre did exist somewhat. The style didn’t have the same mainstream popularity as it does now back in the day. That all did change because of PubG’s insane demand. Just during its early access period, the game saw more than 10 million downloads.

People were always going to pay attention to the boom in the battle royale genre. Soon after PubG came what is arguably the most famous battle royale game right now, yes, we’re talking about Fortnite. Now Epic game’s Fortnite is an absolute juggernaut of the gaming world. In its early days, however, the game was seen as a carbon copy of the Player’s Unknown.

Players of both games can understand that this isn’t entirely true. Both games are incredibly different from each other. The differences aren’t just cosmetic as both games feel entirely different to play as well.

If you want to know which one, you’d rather play, you’ve come to the right place. The article is going to cover the entire Fortnite vs. PubG battle.

It’s only natural that we begin with Playersunknown Battlegrounds. First, it is the game mainly responsible for popularizing the genre. PubG is an online multiplayer battle-royale game. The game is playable on PC, Xbox One, Ps4, and mobile currently. The mobile version of the game is free to play; however, the PC and console versions of the game cost $29.99. PubG is one of the best-selling PC games of all time with 50 million copies sold worldwide.

Now that you’re familiar with PubG, it’s time we turn our attention to Fortnite.

PubG may have brought mainstream popularity to the battle royale genre, but Fortnite since its inception has become a phenomenon. The game has a battle-royale version that is entirely free to play online on PC, Ps4, Xbox One, and mobile. The fact that Fortnite is entirely free to play is something that works in the game’s advantage. The game has taken over the gaming world. Fortnite boasts the highest viewership on stream. It’s arguably the game with the most global players.

Aside from just being a game, Fortnite has found its way into popular culture. Athletes and YouTubers are the most notable example. With athletes frequently breaking out Fortnite dances as celebrations.

However, we aren’t here to talk about Fortnite as a phenomenon. We’re here to give our take on the PubG vs. Fortnite debate. To adequately understand the nuances of each game we must look at several different aspects. These aspects include gameplay, graphics, accessibility and more. Let’s not dally anymore and get into the gist of it all.

Kicking off with gameplay PubG is one of the revolutionaries of the battle royale genre. Something fans of the game will continue to hold over those who play Fortnite. Both games begin with 100 players dropping onto a single map. As soon as the land players have to find weapons and armors to survive. The objective of each round is to be the last person standing.

Both games offer the opportunity to play solo or in different sized teams and each video game at its core is a shooter. However, that’s where the similarities end. Both games feel entirely different to play. PubG offers a more realistic, gritty and accurate shooting experience. The game found inspiration from several tactical shooter games that prioritize realistic combat. Fortnite on the other hand completely flips the page. 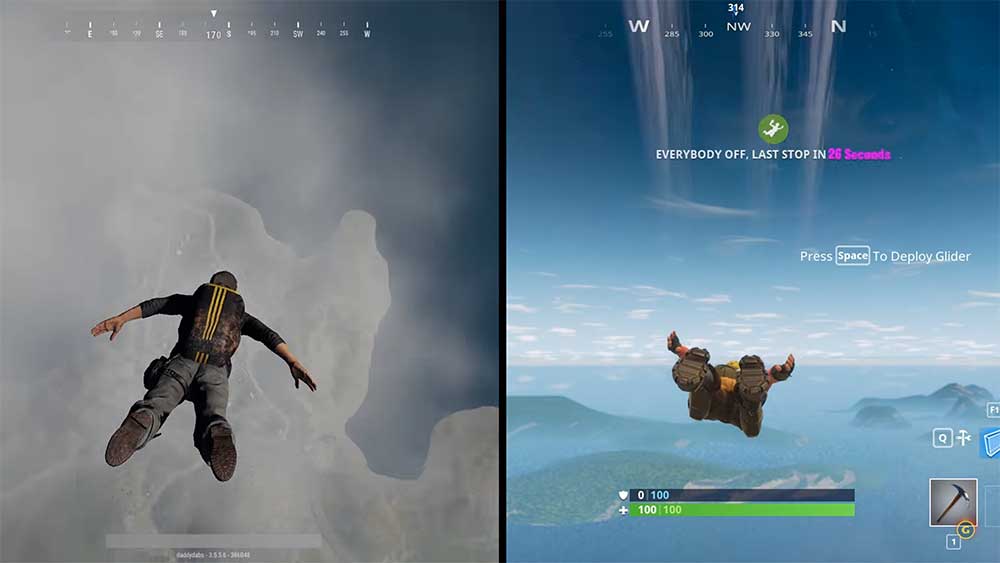 The building mechanic in the game is something unique to the game on its inception. Allowing you to build structures using different shapes Fortnite offers a whole new dimension of tactics where PubG can’t compete at all. However, the shooting in the game isn’t as accurate or realistic as PubG. Additionally, PubG now allows players to switch between third person and first-person mode. Fortnite only works in the 3rd person.

Furthermore, PubG now offers a greater variety of maps, but the original plans of the game were all larger than the single Fortnite map. The difference in size leads to different styles of playing the game. In PubG, players that play hyper aggressive have an insane level of skill, but at times they have to be careful as well. The vastness of the map leaves minimal options for cover and if you’re not careful you’ll be caught in the open too quickly. While in Fortnite, you can build a shelter as you please to gain tactical advantages. Fortune tends to favor the bold more in Fortnite when you compare it to PubG.

One key difference in both games is the level of tension they generate. PubG due to its grittier and more realistic gameplay leads to much tenser encounters. That’s not to say that there aren’t tense moments for Fortnite players, but the gameplay itself doesn’t generate the same level of tension.

It’s time to look at the significant graphical differences between the games. Considering the differences in gameplay, it’s no surprise that the two video games have entirely different aesthetics. PubG like its gameplay goes for a more realistic look, with much darker colors and creates a very somber and tense environment. 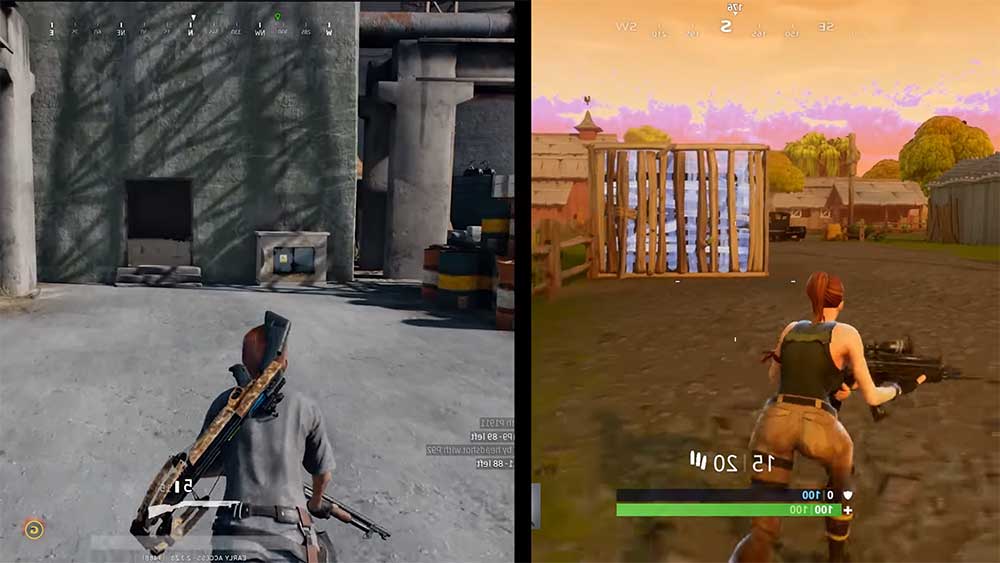 Fortnite, on the other hand, is an absolute blast of color. The game favors a much more kid-friendly animated style of graphics. It works to a simple tee as Fortnite arguably is much more beautiful to look at than PubG. The incredibly colorful and popping environments are an incredibly welcome change from the dark washed up settings of PubG. However, this again can be a matter of simple preference as well.

If you’re looking at the individual graphical performance of both games though, Fortnite wins by quite a distance. The environments in the game are all beautiful and always give off a sense of fun. The rendering of player characters is also smoother. Additionally, each battle pass releases amazing new outfits that players of the game love to collect.

The graphical superiority from Fortnite is reasonable as well. Epic Games is a much larger company than the PubG corporation. It can make use of its increased resources to create a game that both looks better and arguably performs better as well.

By accessibility, we mean how easy the games are to get into for newer players. It’s hard to change the minds of players that are already fans of one game or the other. That’s why it’s important for newer players to understand what each game brings.

Now Fortnite already has the advantage due to it’s free to play status on all available devices. PubG, on the other hand, costs a comparatively massive $29.99 in comparison. So already newer players will find themselves gravitating towards trying out Fortnite.

When it comes to core gameplay, Fortnite is the more straightforward game to grasp as well. Sure, you’ll have to get building and shooting both down as both are core aspects of the game. The task is still more comfortable than getting a grip on PubG’s shooting mechanisms. The realistic grittier shooting features guns with different types of recoils, dps, and rate of fire.

Additionally, the collectibles themselves are simpler to understand in Fortnite. Weapon tiers are color coded, so you immediately know when you pick up a good weapon. The weapons have no attachments or anything complicated you need to understand. Similarly, armor in the game comes in the form of shields that the player can drink.

The collectibles in PubG are different beasts in themselves. Guns have no color coding, so newer players are immediately at a severe disadvantage. In addition to that, there’s the series of different attachments you can find for your weapons. Each accessory betters your gun differently. Armor in the game comes in different levels. However, they come in the form of helmets and body shields. The more realistic gameplay also creates a much steeper learning curve for players of PubG.

Fortnite is the more accessible game by a considerable margin. That can also help explain the reason why it’s more popular than PubG. Newer players tend to gravitate towards because of the easy to understand gameplay and the free to play nature of the game.

Both the games are now absolute juggernauts of the gaming world. In spite of increasing competition from other games, it’s still arguable that PubG and Fortnite are the two top dogs. The Fortnite vs PubG debate is one that will have a lot of people going back and forth. We believe that there’s no definitive answer to the discussion.

You can drop features and argue realism, graphical performance or how easy the game is to play. The matter of the fact is that both games are incredibly different from each other, each with their strengths and weaknesses. There’s no need for a definitive better game when choosing between the two is more a matter of preference than a significant difference in quality. Whichever side you’re on, gear up as you plummet below to the battle arena cause it’s going to be a blast.